The Seattle Seahawks have joined the growing list of NFL teams that are partnering with local casinos, announcing Tuesday that they have signed an agreement with the Snoqualmie Casino. 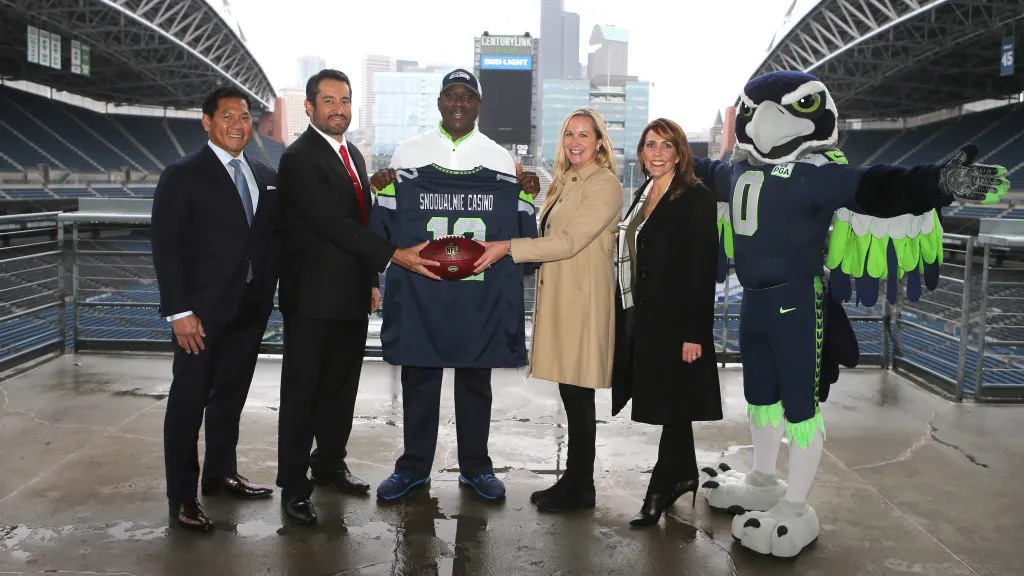 The deal will allow the casino to use the Seahawks logo and other marks for advertising and promotions.

The Snoqualmie Casino had already been a sponsor of the Seahawks, but until this year, NFL guidelines restricted how much each side could take advantage of that relationship. Now, teams and casinos can share brand logos for advertising, and teams can take advertisements from casinos and fantasy sites, provided that no sports betting services are directly referenced in the ads.

“We can’t imagine a better way to cap our 10th anniversary than by announcing an updated alliance between two premier Seattle brands,” Snoqualmie Casino CEO Brian Decorah said in a statement. “We have been a Seahawks sponsor and suite holder since we opened in 2008, so we are looking forward to the enhanced opportunities our newly expanded partnership will create.”

The Snoqualmie Casino is a Native American gaming resort located about 25 miles east of Seattle. Owned by the Snoqualmie Tribe, the venue features both slots and table games along with dining and entertainment facilities.

The NFL’s change in policy was prompted by the May Supreme Court decision that struck down the Professional and Amateur Sports Protection Act (PASPA). Teams began to take advantage of the new rules, with the Dallas Cowboys signing the first deal with WinStar World Casino and Resort in Oklahoma in September.

They were quickly followed by others. The Baltimore Ravens reached a marketing agreement with the Horseshoe Casino in October, making the venue an official casino of the team. That deal has the potential to be particularly lucrative, as M&T Stadium and the Horseshoe complex are located just blocks apart.

While the NFL has certainly relaxed its standards, there are still rules in place to help the league and its teams keep some distance from sports betting – a move likely made to remove any questions about how such sponsorships might impact the integrity of games.

That doesn’t mean that some teams haven’t tried to push the envelope, though. In late October, the New York Jets announced 888 Holdings as a sponsor of the team, in what was the first example of a team getting involved with an online gambling company.

That deal faced further scrutiny, as 888 operates an online sportsbook in the state of New Jersey, where the Meadowlands – the Jets’ home stadium – is located. While the sponsorship agreement doesn’t include any specific references to the sports betting side of 888’s operation, the main portal that advertisements direct fans to include casino, poker, and sportsbook operations – something many feel is close to crossing the line in regards to the NFL rules.

A Game-By-Game Look At The Seahawks’ 2021 Schedule Early thoughts on every game on – Seahawks.com

Rost’s Seahawks Q&A: Will Seattle add at WR in the draft, and could Quandre Diggs be a trade chip? – 710 ESPN Seattle

2021 NFL Draft Preview: What Does KJ Wright’s Status Mean For The Seahawks In The Draft? – Seahawks.com

Pre-Snap Reads 4/25: Emphasis on Seahawks’ tight ends a must for 2021 offense – Field Gulls

Heaps: Seahawks’ next moves with draft over? They’re not done on defense – 710 ESPN Seattle